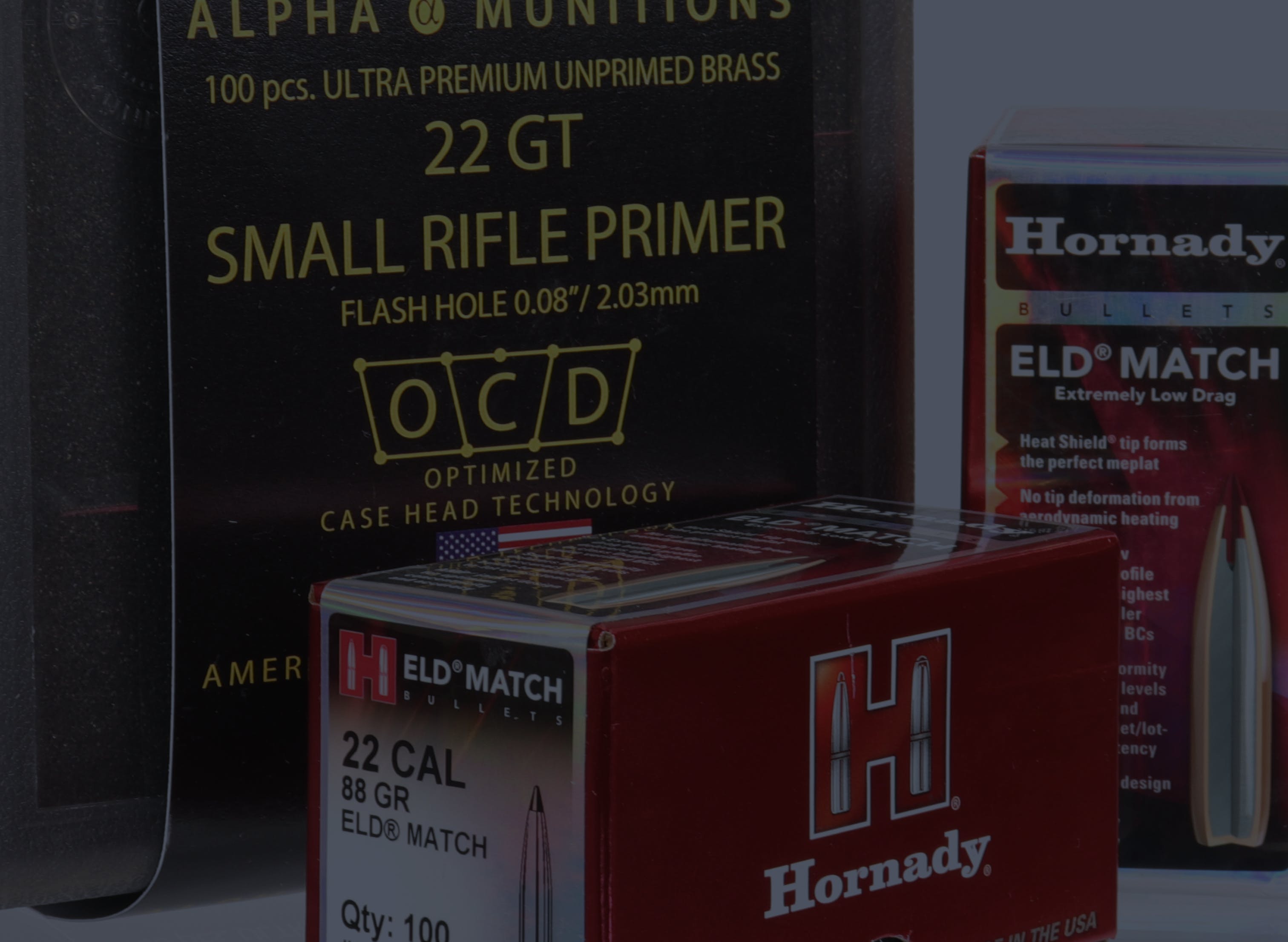 Based on a .308 case rim, the 22 GT is a .22 caliber version of the 6mm GT and is a result of a collaboration between George Gardner of GA Precision, and Tom Jacobs of Vapor Trail Bullets. The benefits of the 22 GT include problem-free feeding in AICS magazines and standard short action receivers, properly headstamped brass, an appropriate case volume for lower SD velocities, and lower recoil combined with higher speeds and flatter trajectories.

We had no issues with reloading 22GT. Similar to 6GT, Alpha Munitions offers 22GT OCD headstamped brass ready to load from the factory, so there’s no need to neck down, fireform, etc. You certainly can use 6GT brass that has been converted to .224, but overall, it’s a very straightforward process. Here is our process from 1x fire to reload:

General disclaimer: We highly recommend selecting a bullet based on your application, chamber, barrel twist, and freebore. Similarly, select a powder based on your bullet selection, barrel length, and speed goals. It’s important to use components that work well together in your gun and will maximize performance for your specific use. What works for us in precision rifle competitions is obviously not optimized for varminters, hunters, etc. With that said, there are many different combinations that can be used effectively in a 22GT. Hornady 88gr ELD-M, 90gr A-Tips, and Sierra 95gr SMK are all popular bullet choices as are any powders with burn rates somewhere between Varget and H1000 (H4350, RL-16, and H4831sc).

No did not experience any issues with component availability. The brass comes and goes depending on Alpha’s production cycle, but as mentioned earlier, 6GT brass can also be converted (Hornady/GAP/Alpha) if needed. The Berger bullets have been and continue to be regularly available, along with Hornady ELDs and A-Tips. Powder and primers will likely be the main shortage culprits, but as stated above, there are plenty of combinations that will work well depending on what you have or can find.

We experienced very small feeding issues when we first tried it in the AT-X with AX/AW mags. Seating rounds as far rearward as possible would cause the bolt to skip over the case head instead of picking it up and feeding it into the chamber. The remedy to this was to move the cases forward in the mag so the shoulder interfaced with the forward rib in the mag (see picture). HRD 6BR/Dasher mag kits can likely be made to work with slight modification to the spacer (they are slightly too long to work with the GT case), but just moving the cases forward in the mag has been 100% reliable so far.

Feeding issues with GT cases/AICS mags in general have also been well-traveled, though we have not come across one so far that can’t be made to work reliably with slight feed lip modification. This is mainly action, chassis, and mag dependent, but the issues are always similar to those described above where the bolt will not always pick up the round. We’ve also seen GT cases fed using BR spacer kits (MDT, Primal Rights, etc.), though this will likely limit your seating depth as you run out of room in the front of the mag.

Again, as a general disclaimer, we always recommend starting low and working up to pressure, and velocities will always depend on a number of factors (environmental conditions, barrel length, bullet/powder used, and so on). In a standard 26” barrel with standard freebore, a 22GT loaded with 85-95gr bullets will yield muzzle velocities anywhere between 2900 and 3200fps comfortably.

In our test gun specifically, 35.0gr H4350, Berger 85.5gr LRHT, seated ~.020” off the lands produced an average MV of 3101fps with standard deviations and spreads in the single digits. We are confident in saying this charge weight is operating well within the pressure limits of a GT case, but again this will largely be dependent on the end user.

Like most of what we’ve stated above, recoil will always depend on a multitude of factors. We’ve spent most of my time shooting competitively using 6mm bullets (105gr Hybrids to be exact) at velocities from 2800fps all the way up to 3150fps. Without going too far into how bullet/rifle weight, balance, height over bore, muzzle devices, etc., all affect felt recoil, We can comfortably say that the 22GT recoils less than its larger caliber counterparts.

Basic physics states that for every action, there is an equal and opposite reaction. This means that if you shoot a 105gr bullet at 3150fps and an 86gr bullet at 3150 fps out of the same gun, you will feel less recoil with the lighter bullet. With that said, we believe there is a point of diminishing returns when it comes to recoil impulse. All else being equal, yes, a 22GT “outperforms” a 6mm in this regard, but there are many different ways to manipulate the way a gun reacts when you fire it. In essence, if you’re trying to decide between .224 and .243, We would not let this be a determining factor.

Both 22GT and 6GT are high-performance, competition-oriented rounds. Both perform exceptionally well in terms of accuracy and consistency, though we would argue that a majority of that comes from the ammunition/loader/shooter, and not the round itself. Having used various 22cal and 6mm cartridges over the last few years, we don’t believe there is a right or wrong answer – there are a lot of different ways to achieve the same end goal, but the GT is definitely up to the task.

Specifically speaking, we feel that the high-BC .22 cal bullets do as well as or even better in the wind than some 6mm offerings at this point, but again, it will largely depend on the shooter and application. It has not been uncommon to see the 22GT produce 100-yard 5-round groups in the .1s and sub-.5 MOA groups at distance. Then again, it’s not necessarily uncommon to see a 6BR, 6 Dasher, or 6 Creedmoor yield the same results.

All-in-all, we really like the 22GT for its performance and ease of use. It’s extremely consistent, low recoiling, and forgiving to load for. With that said, we say the same thing every time we try a new round: it works well, but it’s certainly not hitting targets that we would otherwise miss.